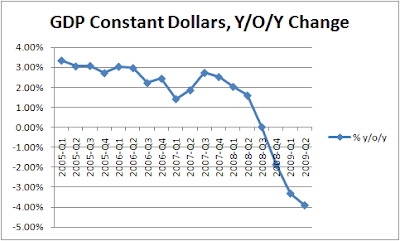 This graph tell the story of Gross Domestic Product in constant dollars in its Year-over-Year change.

Those in the statist media and government are trying to tell you the recession is over. Bull-oney!

This chart comes from Market Ticker. Suggest you follow his site. 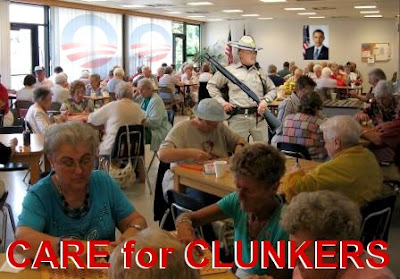 I confused Obamacare for Cash for Clunkers and traded in my Grandmother for $4500!! At least she will receive the appropriate "end of health care" government counseling. Go-Granny-Go!

The fed/gov suspends the very popular "Cash for Clunkers" program. This short news clip video does a good job of explaining why the gov't program is failing.

This fed/gov program is the ominous harbinger of bureaucratic confusion that will accompany your health care, should the government take it over.

The government is very familiar with getting ripped off. They install complex rules and forms, etc. to try and block the fraud. In short ask yourself: "Who gets ripped off more ... government or insurance companies?"

When Ronald Reagan recorded this Coffee Cup Campaign speech in 1961, he was a private citizen; just like Sarah Palin!

Reagan explains the loss-of-liberty consequences should government takeover our health care. History is repeating itself ... again.

Hot-headed Harvard elitist Henry Louis Gates Jr. demonstrated that he doesn't have the temperament to appreciate what happened the night he was arrested.
The fact is an officer responded to a call that a house might be in the process of being looted.
It takes a lot of training to know how walk into such a situation and still be able to go home after one's police shift and see your wife and kids.  This happens everyday across the land.
But the bone-headed professor who has spent his life studying "race," missed and rejected a perfect opportunity.
Why didn't the "good" professor simply THANK the officer for responding to the call and for protecting his property?
Given the professor's actions, he should never complain about slow and delayed police responses in other areas of the country.
Apologize NOW Mr. Harvard elitist, Henry Louis Gates Jr.
Finally, comedian Chris Rock produced a hilarious video titled: "How not to get your ass kicked by the police!"
In that video, Rock advises one to, "be polite," something Gates refused to do.
Posted by Liberty Spuds at Friday, July 24, 2009 2 comments:

Health Rations and YOU!

Confused about why health rations are the rational choice? We at the Health Administration Bureau have created a nifty video that will address all of your concerns!

"I Need a Bailout" Song/Video

Here is a quick video song for your pleasure:

Click here for an excellent article arguing against confirming Sotomayor to SCOTUS.
It is a quick read.  Her underwhelming legal acumen is concisely dissected.
Posted by Liberty Spuds at Thursday, July 16, 2009 No comments:

"A man is a boy, is a dog, is a bug," or some such famous nonsense was said by a ding-a-ling enviro mental-case activist.

Another Margaret Sanger type "nature above man" eugenicist was asked if a grizzly attacked his son, would he shoot the grizzly? He replied that it is more important that the bear live. <Thanks, Dad! Does your coffee taste bitter?>

A recent bear mauling in E. Idaho just across the border from Yellowstone Park has generated numerous "man is the problem" news and blogger reports.

Here are a couple samples:

Bear Found, and it's OK

And, to round off my point, in one of the same blogs right below the "bear better than man" post comes:

Why is it that few if any of these earth worshippers don't volunteer to purge themselves to protect the planet; or reject the man-made, earth-scaring, pollution generating mining of metals that are used in the production of modern day dentistry tools?

Posted by Liberty Spuds at Wednesday, July 15, 2009 No comments:

Did Aliens breed leftist politicians in 1947?

Some of you will recall that on July 8, 1947, a little over 60 years ago, witnesses claim that an unidentified flying object (UFO) with five aliens aboard crashed onto a sheep and mule ranch just outside Roswell , New Mexico .

This is a well known incident that many say has long been covered up by the U.S. Air Force and other federal agencies and organizations.

However, what you may NOT know is that in the month of April 1948, nine months after that historic day, the following people were born: Albert A. Gore, Jr., Hillary Rodham, John F. Kerry, William J. Clinton, Howard Dean, Nancy Pelosi, Dianne Feinstein, Charles E. Schumer and Barbara Boxer.

See what happens when aliens breed with sheep and jackasses?

I certainly hope this bit of information clears up a lot of things for you. It did for me.

No wonder they support the bill to help illegal aliens!

Posted by Liberty Spuds at Wednesday, July 08, 2009 No comments: