SPUD NOTES: This is an article from Paul Jacobs who heads Common Sense.

Doug Bandow agrees with Lord Acton. Me too. The political commentator believes that the congressional Republicans are bent on proving the truth of Acton's famous axiom, "Power tends to corrupt, and absolute power corrupts absolutely."Bandow writes, "The GOP began to sell out its principles shortly after seizing control of Congress in 1994, but the abuses continue to grow.

Today, as a few courageous House fiscal conservatives press for offsets against the virtually unlimited spending proposed in the aftermath of Hurricanes Katrina and Rita, the Speaker and his coterie have acted like a woman scorned. Preaching unity, they have trashed any Republican suggesting that free-spending bail-outs are not the conservative way."

Bandow also says the Republicans are worse than the Democrats, having learned to lord it over the rest of us even more riotously during their own tenure in control. Now they're even making announcements about which investors should or should not invest in a DC baseball franchise.Are Republicans really so much more power-mad than the Democrats? Their record, when it comes to porkbarrel politics and dictating the fate of baseball franchises, ain't good, that's for sure.

But maybe it's just that every generation of career politicians finds ever-more ludicrous ways to run riot.Bandow is implicitly making a case for term limits. While ideology may matter on certain questions, it apparently does not matter on the question of which entrenched group of career politicians will spend us into oblivion. Both will, either will, given the chance. Birds of a feather flail and splurge together.

This is Common Sense. I'm Paul Jacob.
Posted by Liberty Spuds at Monday, October 24, 2005 No comments:

(Boise) -- Today, Idaho State Representative and 1st Congressional District candidate Bill Sali (R-Kuna) called on Governor Dirk Kempthone to quickly convene a Special Session of the Idaho Legislature for the purpose of suspending the state’s 25¢ gas tax for a period of three months.

“It is time we gave Idaho taxpayers a breather from skyrocketing gas prices,” said Maxwell. “The state’s running a fat revenue surplus and instead of legislators ballooning the already bloated budget; give the folks back home a break.”

“With winter bearing down on us, cutting the gas tax would be a great relief, especially for families that are hit hard by ever increasing energy prices,” said Maxwell.

“Taxpayers were forced to cough up an additional 1¢ sales tax increase when the government was struggling to expand during the recession years, now it is time for elected leaders to return the favor,” added Maxwell.

He predicted that some politicians will “hurrumph” up plenty of excuses as to why we shouldn’t give the taxpayers a break. “But, I believe there will be enough momentum to cut the gas tax from their voters, that many of the big spenders will clam up and not openly object for fear of the backlash.”

Here are some headlines from around the country regarding gas tax cuts:

Democrats Push Bush for Gas Tax Relief
(TALLAHASSEE) -- Senate Democrats on Tuesday urged Gov. Jeb Bush to use his emergency powers to temporarily cut the state's gas tax to give motorists some relief at the pumps. (9-7-05)

Governors Should Ease Pain at Pump, Act Now on Gas Tax Relief, Nation’s Largest Taxpayer Group Urges
(ALEXANDRIA, VA) -- “Government can’t, and more importantly shouldn’t, try to control fuel prices, but it can and should reduce fuel taxes,” said National Taxpayers Union President John Berthoud. “By taking action now, especially at the state level, elected officials can not only help consumers cope with still-volatile gasoline costs, they can help the economy by easing the squeeze on businesses that need stable fuel expenses to thrive.” (9-20-05)
Posted by Liberty Spuds at Thursday, October 13, 2005 No comments:


Next time let's all be more prepared. 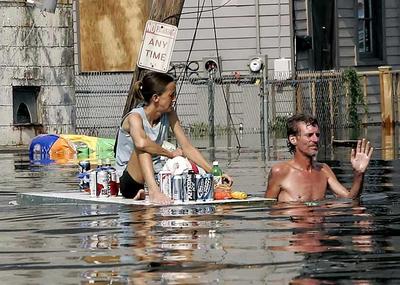 The Final Numbers are In!

SPUD NOTES: Ann Coulter had this little ditty on her web site dated 10/04/05. She made such an excellent observation, so I thought I'd share it with you ---

*Republican In Name Only

One of the funniest comedians I know, Jeff Foxworthy, has developed his comedy routine by providing a test for people who are not sure if they are a Redneck. For example he would say, “If you ever took a can of beer to a job interview, you might be a Redneck.” I started to think about the Republicans in my state and others who are not sure if they are RINO's. I was pondering that question and I started to think of ways you can tell if you might be a RINO. Here are some of my random thoughts in no particular order, however they are not meant to be funny.

Once I started these thoughts, they just kept flowing. I’m sure you can think of many more, so if you have additional RINO indicators, I would like to hear them. You can reach me at jonelli@optonline.net.

--- Joseph Tomanelli is President and co-founder of the New Jersey Republican Assembly, “The Republican Wing of the Republican Party;” he has earned a BS degree in Business from Ramapo College and an MS degree in Management and Operational Auditing from NJIT. He is also a CPA, former President of the Mahwah Republican Club, an elected County Committeeman, and a self-described RINO Hunter.

Posted by Liberty Spuds at Tuesday, October 04, 2005 No comments: