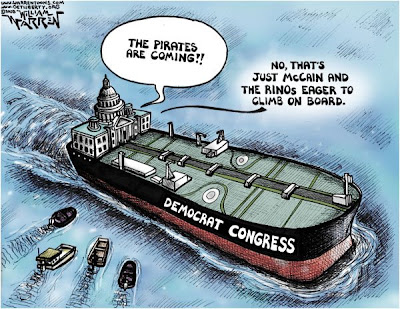 Posted by Liberty Spuds at Wednesday, November 26, 2008 No comments:

It seems eligibility is in the news today. Via Instapundit, I read two articles, one at DailyKos and one at The Volokh conspiracy, regarding Hillary Clinton's eligibility to serve as Secretary of State for the Obama administration. My reading of the story online indicates the DailyKos blog came first.

The source of the issue is something called the Emoluments Clause, which is a clause in the Constitution that essentially states that, while a person is serving a term of office to which they were elected, he or she may not be appointed to any civil office which was newly created, or for which the compensation was increased in that same term. So because there was a pay raise given to the position of Secretary of State during Senator Clinton's current term, she is ineligible for appointment to this office. The wording: "No Senator or Representative shall, during the Time for which he was elected, be appointed to any civil Office under the Authority of the United States which shall have been created, or the Emoluments whereof shall have been increased during such time; and no Person holding any Office under the United States, shall be a Member of either House during his Continuance in Office."

That's not all, either. This is not, apparently, the first time the issue has come up. Multiple examples are available at the sources above, but one in particular would be pertinent in the case of Hillary. When President Nixon wanted Sen. William Saxbe for his Attorney General, he had Congress reduce the wage, which had been increased and triggered the clause, in order to get around the restriction. The maneuver has been dubbed the "Saxbe fix".
Read more ...
Link: Calabe Howe
The Political Machine
Posted by Liberty Spuds at Tuesday, November 25, 2008 No comments:

We should do this in our state!
Link:  Columbia, SC—Most people are probably unaware of it, but on the Friday and Saturday after Thanksgiving, handguns, rifles and shotguns will be sales tax free in South Carolina. State lawmakers passed a bill in June that includes the sales tax holiday on firearms. They called it the Second Amendment Recognition Act.

Rep. Mike Pitts, R-Greenwood, was the sponsor of the original bill. He said he got the idea after talking to the owners of a hunting outfitters shop in Clinton about the late summer sales tax holiday for back-to-school supplies and clothing. The store owners said they could use the stimulus, too. "It was to help dealers," Rep. Pitts says. "Another point was to bring recognition to the 2nd Amendment."

Kent Parsons, manager of Barron's Outfitters hunting and fishing store in Columbia, says the days after Thanksgiving are typically busy sales days anyway. He's hoping that even more people than usual will be buying shotguns and rifles from his store since they'll be sales tax free. Sales tax will still be charged on ammunition and accessories.

Posted by Liberty Spuds at Monday, November 24, 2008 No comments:

By Cliff Kincaid of Accuracy in Media  (11-16-08)
"...the growing anger over the endless series of taxpayer bailouts is getting louder and louder."
The American people may be losing their jobs and savings, but on Friday night, on the eve of the international financial summit, they provided President Bush and other G20 leaders a lavish banquet that included $300-a-bottle wine, Vermont Brie, eggplant fondue, and rack of lamb. Details of the "culinary delights" and "sumptuous feast" provided to the politicians who departed their black limousines were included in wire service stories. They were toasting the demise of America as a global economic and military superpower and planning to loot another trillion dollars from U.S. taxpayers.
Read the rest of this article ...
Posted by Liberty Spuds at Monday, November 24, 2008 No comments:

I'm still searching for the mythical creature that is the "financially conservative, socially liberal" politician.  In virtually every case, the pro-abortion or pro-gay marriage politician is the first to vote against a tax cut, the first to vote for more spending and quick to compromise principles on any issue there is.
Using the National Journal's ratings of Senators in 2007 , the correlation coefficient between "economic" scores and "social" scores is 90%.  That means they almost always go together; financial conservatives are social conservatives and vice versa.   Every Senator scoring above 60 in economic issues, scored above 50 in social ones.  Every Senator scoring below 40 in economic issues, scored below 50 in social ones.  If there is such an animal as a "financial conservative, social liberal", it does not exist in the US Senate. 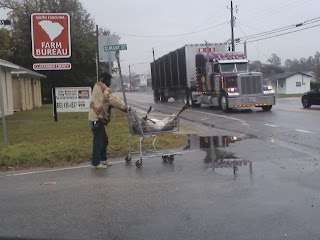 United Auto Workers -- Put Up or Shut Up

UAW union bosses have said they won't budge to help the ailing Big 3 auto companies.  They just want the big taxpayer bailout.
Here is an idea:  Why don't they invest some $7-10 billion from their pension fund and buy stock in the companies?
Put up or shut up.
Posted by Liberty Spuds at Monday, November 17, 2008 No comments:

Knock, knock ...
Who's there?
Kenya.
Kenya who?
Kenya tell me where Obama was born?
Posted by Liberty Spuds at Friday, November 07, 2008 No comments:

You know, the biggest problem the grassroots Idaho and national GOP has in enacting the party platform of limited government, lower taxes, reduced government spending, more individual freedom and liberty is the liberal GOP RINOs who always, and without fail, abandon candidates who promote these very principles.
In the future, Just say no to RINOs and don't vote for them, ever.  Just like they do to conservatives.
Mid-stream analysis seems to show that many conservatives sat this election out.  Good for them.
McCain/Bush ... good bye!
Posted by Liberty Spuds at Thursday, November 06, 2008 No comments:

This email from my firearms wholesale buddy

Hey Bud,
Sorry for the lack of communication, life has been busy. My business has increased TEN-FOLD in the last 2 days, I am literally overwhelmed! Give me a call tomorrow if you can on my cell phone.
Posted by Liberty Spuds at Wednesday, November 05, 2008 No comments:

Replace your "W" with this "O" sticker 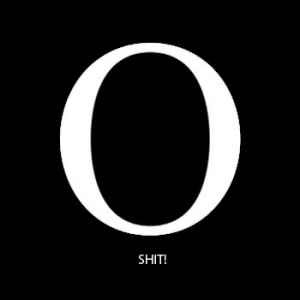 Posted by Liberty Spuds at Wednesday, November 05, 2008 No comments:

Posted by Liberty Spuds at Wednesday, November 05, 2008 No comments:

Will "O's" get plucked from White House keyboards?

Will Bush's White House staff trash the place, steal stuff and pop the "O's" off the keyboards?

Remember when the Clinton staff flicked off the "W's"
Posted by Liberty Spuds at Wednesday, November 05, 2008 No comments: 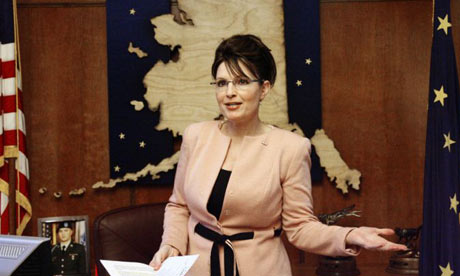 IT'S BUSH'S FAULT!
(RINO's get clobbered)
Posted by Liberty Spuds at Wednesday, November 05, 2008 No comments: